On Tuesday, August 23, the teenage son of the California Mountain Biking Coalition president was riding his bicycle home on the West County Trail when another cyclist came around the corner, crashed into a metal pole smack in the middle of the trail. The boy called 911 and performed CPR; unfortunately the victim, Santa Rosa chef & restaurant owner Rob Reyes, did not survive his injuries.

We’ve been tracking cyclist deaths in Sonoma County for five years; this is the first one I’m aware of that occurred ON A SEPARATED PATH, the very place that is supposed to be safe for us! 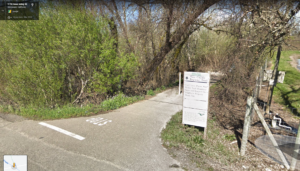 Our Class I bicycle & pedestrian paths are full of these poles. Sometimes they are painted yellow; others are bare metal. As you can see from the photo, many are scarred from collisions. We assume they are placed with the intention of keeping motor vehicles off of the path; however, they pose a substantial hazard to cyclists.

They are particularly hard to see in dappled shade, when coming around a corner, or when there are a lot of people on the path (their height makes them easily hidden from view).

We’ve all witnessed collisions and had some near misses  – since sharing the Press Democrat coverage of Mr. Reyes’ death, our inbox has been full of stories! One of our Board members broke his hand colliding with a bollard last year. A friend of a friend broke their leg in a similar incident. A founder of Chico Velo became a quadriplegic after crashing into a bike path bollard. I’m sure the stories will continue to roll in.

Bollards are likely not necessary in every location where they are deployed; if they are, there are flexible and collapsible bollards that would cause less harm if struck. (Many of them LOOK quite solid – I’m thinking of some I’ve seen lining protected bike lanes in the East Bay. You wouldn’t know they’re bendable to look at them.) There are other solutions involving adjustments to the width of the path entrance.

The most recent update of the California Manual on Uniform Traffic Control Devices states:

01 Before a decision is made to install barrier posts, consideration needs to be given to the implementation of other remedial measures [emphasis mine], such as Bike Path Exclusion (R44A(CA)) signs (see Section 9B.08) and/or redesigning the path entry so that motorists do not confuse it with vehicle access.

02 It could be necessary to install barrier posts at entrances to bike paths to prevent motor vehicles from entering. When locating such installations, care needs to be taken to assure that barriers are well marked and visible to bicyclists, day or night (i.e., install reflectors or reflectorized tape).

03 An envelope around the barriers should be striped as shown in Figure 9C-8. If sight distance is limited, special advance warning signs or painted pavement warnings should be provided. Where more than one post is necessary, 5 foot spacing should be used to permit passage of bicycle-towed trailers, adult tricycles, and to assure adequate room for safe bicycle passage without dismounting. Barrier post installations should be designed so they are removable to permit entrance by emergency and service vehicles.

05 Such devices should be used only where extreme problems are encountered.

Note that none of the bollards on the West Country Trail appear to meet MUTCD standards.

We’ve urged Regional Parks to remove these poles from all bike paths and utilize other solutions where vehicles pose a problem; click here to email them and share YOUR story.