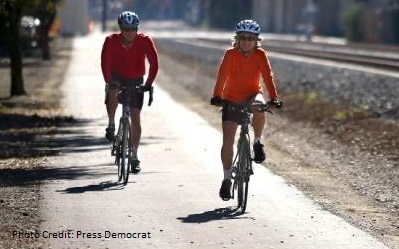 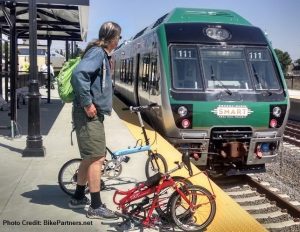 We have recently met with new Sonoma Marin Area Rail Transit (SMART) General Manager Eddie Cumins as well as other SMART staff members; we are optimistic about an improved relationship with the agency, greater transparency on their part, and more definitive commitment to completing the path.

Here are some behind-the-scenes updates.

On February 2, SMART awarded a $2.5 million contract to BKF Engineers for engineering design and permitting services  for seven  sections of the pathway, SIX of which are in Sonoma County. This will close gaps between Steele Lane and Airport Blvd; between Penngrove and Cotati; and around downtown Santa Rosa. This work is expected to be completed by June 2024.

They are currently wrapping up design and working to secure construction permits for the segment connecting Golf Course Drive in Rohnert Park with Bellevue in southern Santa Rosa. It is still unclear when construction might begin, given the current lawsuit filed against SMART regarding easements on sections of the pathway.  We continue to monitor these legal proceedings.

The extension to Windsor (rail and path) is on hold due to another lawsuit regarding Regional Measure 3, which increased Bay Area bridge tolls to raise money for transportation projects; funds were allocated for this project, and the tolls are being collected, but the funding can’t be dispersed until the suit is resolved. (Two courts ruled in our favor, it is now under appeal before the State Supreme Court.)

Two other path-related projects  in the works are wayfinding and usage counts. While SMART collects, analyzes, and distributes all sort of train ridership statistics, to date they have done NO counts or surveys of path users. We have suggested what we think are the most relevant locations on the path to survey usage now and again when the gaps have been closed – it is our hypothesis that usage (especially by cyclists) will dramatically increase when we are able to use it for longer distances. We have also shared our frustration with the lack of signage at stations and where the path crosses streets – it is difficult for the new user to know where the heck they are, and how to get to the next segment of path. We’ve discussed “quick and dirty” methods as well as more longterm solutions.