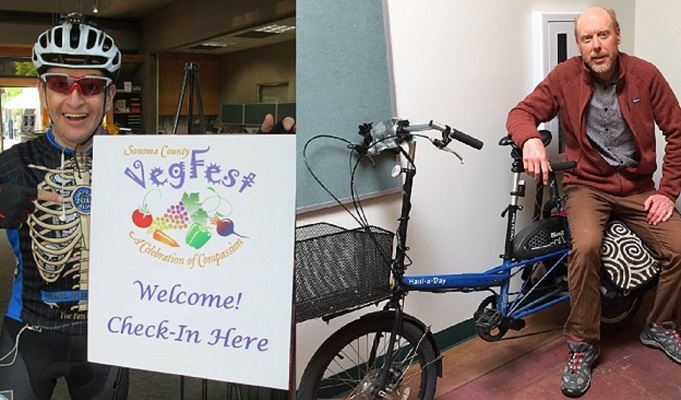 Every year, in celebration of Bike to Work Month, each of the nine Bay Area counties crowns one dedicated and inspiring individual committed to travelling by bicycle as their primary mode of transport as “Bike Commuter of the Year.” This year,  SCBC was so touched by the stories of two particular individuals, both steadfast bike commuters and so inspiring in their own right, we felt that both deserved to be crowned and celebrated! Our congratulations go out to 2017 Sonoma County Bike Commuters of the Year, Shaun Ralston and Steve Bush! Shaun and Steve will be further honored at our Bike Commuter of the Year celebratory party  (stay tuned for more information) and each will receive a special set of prizes! Shaun Ralston, a Regional Manager at Sutter Health, has become a dedicated bicycle commuter logging nearly 3,000 miles/year. After a diabetic diagnosis 15 years ago, Shaun ditched his car in favor of a healthier two wheel option. Ever since, he has become a 100% green commuter, cycling most days to his Santa Rosa hospital office and navigating weekly public transit connections to his San Francisco corporate office. Shaun has developed a love for recreational cycling, too, riding and organizing some of Sonoma County’s favorite charity century rides. As a weathered bike commuter, Shaun learned about the need for cycling advocacy and currently serves as Vice Chair of the Santa Rosa City Council Bicycle and Pedestrian Advisory Board. Among his other duties at Sutter Health, Shaun operates the staff transit/green incentive program which is designed to increase employees’ use of alternative modes of transportation, including bicycle commuting. Despite this busy schedule, Shaun absolutely cherishes his road time claiming, “Nothing compares to the simple pleasure of riding a bike.”

Steve Bush and his wife live car-free and bike everywhere. Steve is an inspiration for Kindergartners at Sonoma Country Day School for his excellence in inspiring young minds first and foremost, but also for his commitment to the environment in so many ways. Most obviously is his daily commute to school – rain or shine – on his trusty Bike Friday folding bike. Steve’s gorgeous blue bike parked outside of his classroom has become an iconic piece of each school day. He is truly an inspiration to students, faculty and others!