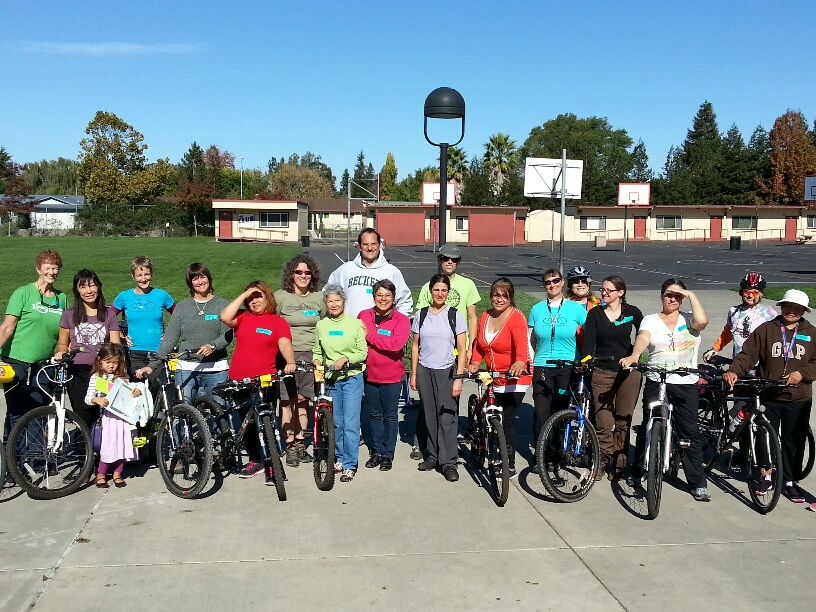 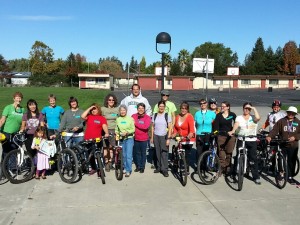 Have you ever wanted to learn how to ride a bike but thought you were too old or never had the time to do it?  Well, on November 1st 6 women changed how I view, “it’s never too late!” The Bike Coalition offered its first Learn to Ride Class for women (of all ages, seriously) to come out to a safe, non-competitive environment where they could learn to ride a bike.  Little did the Bike Coalition and its volunteers know how this event would impact our lives.

At 10 am our ladies began to arrive, anxious and nervous but we paired them with one of our volunteers.  Each volunteer took the time to fit each woman to a bike; having its pedals removed and seat lowered so that the women were able to place their feet flat on the ground.  The volunteers then proceeded to walk alongside the women and offer some simple instructional tips to balance on the bike.  Four of the attendees were Spanish speaking, however that did not stop the volunteers from assisting their students.

As time passed, the women were moving into each level of learning; from scooting to braking, to power pedal push, and finally pedaling and braking.  By the end of the class, they had taken a childhood dream and made it a reality. They were riding a bike! As I watched this progression I could only feel inspired that it’s never too late to learn how to ride a bike. NEVER!  Determination and dedication trumped any possible room for failure in the lives of each of the women involved. Watching our oldest student (73 year old) pedal and come to a complete stop was inspiring!

As your Bike Coalition we will continue to educate and advocate in this county the value that this class has served. As Tina Panza our Safe Routes to School program Director wrote in an email to all who helped, “Seeing what transpired…reminds us once again how much bicycles can bring about change, both personal and at a community level—they truly are tools for empowerment and transformation!”  So, keep your ears perked and eyes opened for anyone who wants to learn how to ride a bike because as we learned…It’s never too late to learn how to ride a bike!