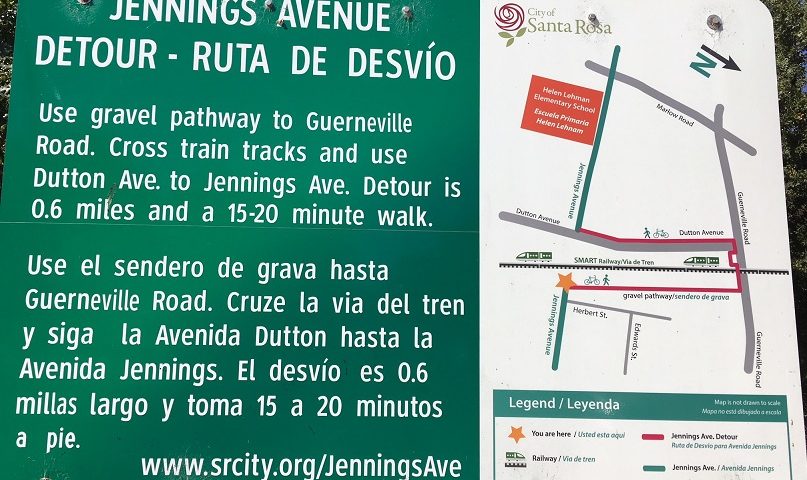 Bicyclists and pedestrians have waited very patiently for the Jennings Avenue Crossing, but now SMART is denying the City of Santa Rosa project approval due to newfound safety concerns. Attend the SMART Board meeting on Wednesday, September 19, to let SMART know that you want a bicycle and pedestrian crossing of the tracks at Jennings Avenue!

When the informal bicycle/pedestrian crossing was closed in anticipation of the train, the only safe and convenient bicycle and pedestrian connection available between several densely-populated neighborhoods, nearby schools, public transit, the library, the Coddingtown Mall, the post office, and more was eliminated. In addition to the important role this key connector plays to local residents, it is also an integral component of the City of Santa Rosa’s overall east-west bicycle and pedestrian network.

The bicycling and pedestrian community has long supported the SMART project. However, to deny us use of an important community corridor on the basis of safety concerns, while putting us at greater risk as we’re forced to use less-superior and less-safe routes, is simply unacceptable. Attend the SMART Board meeting on Sept. 19 to voice your concerns to the Board.