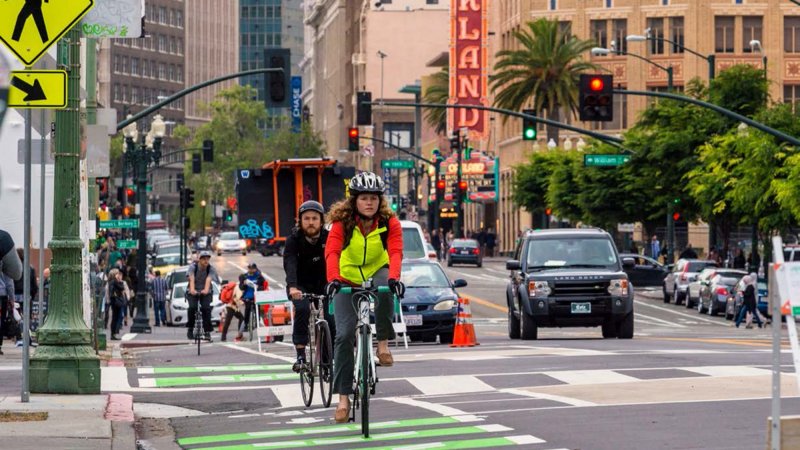 Recently I spent three days in Oakland attending the California Bike Summit, a biennial gathering of bike advocates & activists. Since my work centers around getting people OUT of their cars and onto bicycles, I decided I should figure out how to get myself there without driving.

I packed everything on my trusty Electric Tomato (doesn’t everyone name their bikes lol?) and set out with ample time for any challenges that might occur. I rode the mile from my home to the SMART station in a state of high excitement, and enjoyed the train ride to downtown San Rafael. 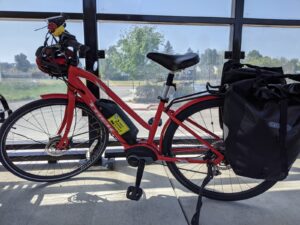 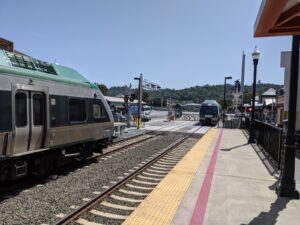 I’d ridden across the Richmond-San Rafael Bridge before, so I felt pretty confident as I headed southeast with sunny weather and little wind. It was AFTER I passed the farthest point of my previous ride that things got a little wonky – I’d not studied the route carefully enough and got a little turned around near the Richmond Marina. (My Strava track has LOTS of wiggles in it!) Eventually I figured it out and continued on the Bay Trail, past lots of parks and tiny beaches and neighborhoods I’d never seen before. Getting lost is part of the adventure, right? 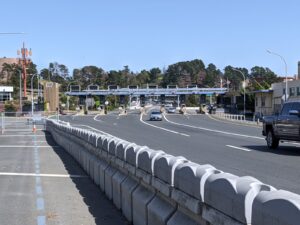 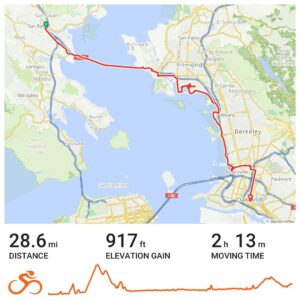 After another small “scenic detour” in oh-so-scenic Emeryville, I cruised down Berkeley bike boulevards and down Telegraph Avenue’s wonderful protected bike lanes to my hotel. Door to door time: four hours. 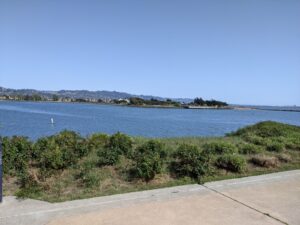 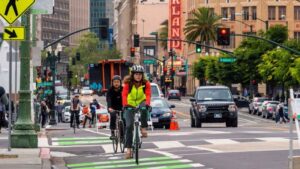 Oh, but that four hours was so much more enjoyable than ninety minutes in a car! I got exercise, felt the sun on my arms and the sea breeze on my face, smelled the sea and heard the sea gulls, and was able to get lost in my thoughts – rather than sitting in a little metal box in traffic hating on all the other little boxes!

On my way home after the conference, I shaved an hour off my travel time by taking BART from downtown Oakland to the Richmond station. I had a lovely conversation with another middle-aged female e-bike rider on that train. My route from BART to SMART was about 90% on separated pathways. I enjoyed passing volunteers gardening along the path and a group of people on a corner, smiling and waving with flags and a sign reading “You’re AWESOME today!” I have no idea who they were or why they were there, so I just pretended they were my own personal welcoming committee.

I know that not everyone has the interest, time, or fitness to take on a journey of that length, but there is one important takeaway I’d to leave you with: combining your bike with public transit vastly expands the distance you can travel without a car! Whatever the radius of your comfortable cycling circle, if it includes a train station or bus stop you can draw another circle around every place that train or bus stops. It’s easy to just roll your bike onto the SMART train and so far there has always been enough room!  Sonoma County Transit, Santa Rosa, and Petaluma buses have a smaller capacity, and you have to be able to lift your bike onto the front rack; if the rack is full you are out of luck. Some Golden Gate Transit buses have front racks and some have giant drawers underneath the bus. Taking my heavy e-bike on BART meant squeezing through turnstiles and squishing into elevators. But any of those inconveniences pale in light of the sheer JOY I experience when I just Bike2it! 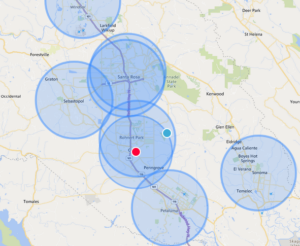