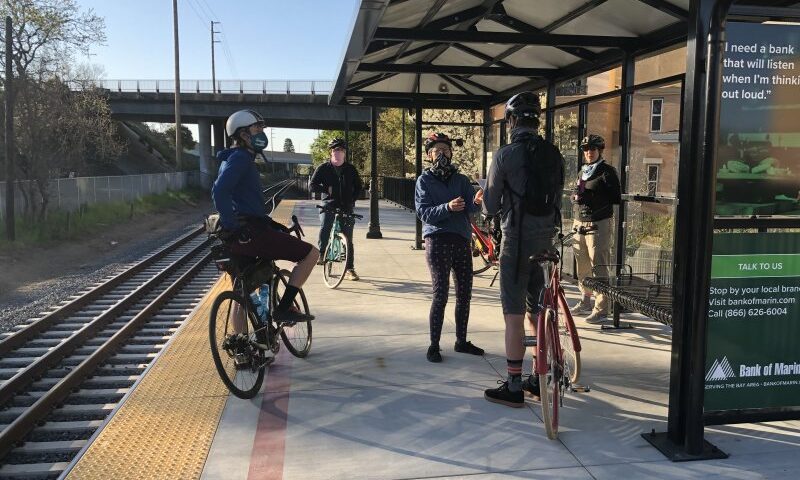 On Friday, March 26, we took three SMART Board Members on a thirty-mile bike ride from downtown Novato to the North Santa Rosa train station at Guerneville Road.

Our purpose in inviting the Board on this ride was to share with them an actual user experience of the SMART multiuse path (and the gaps between path segments). Too often decisions are made about transportation methods by staff or elected officials who have never actually RIDDEN them to get somewhere! We recorded the entire ride to share with Directors who were unable to join us, and we are hoping to help MCBC organize a similar ride of the Marin section.  (We’ve broken them up into sections of 25-30 minutes each: Novato to Petaluma , Petaluma to Cotati, and Cotati to Santa Rosa. Don’t worry, we’ve speeded it up so it won’t take you as long to watch as it took us to ride!)

Luckily we were blessed with warm and sunny weather, as we departed from the Downtown Novato station heading north.

SMART’s website claims that they have completed the pathway from the San Marin Station to the county line; however the ten-mile stretch from Novato to downtown Petaluma actually includes less than TWO MILES of Class I separated bike path! The rest is on Redwood Boulevard, San Antonio Road, and Petaluma Boulevard South.  Much of it runs alongside the freeway. In many places the bike lane is nonexistent, too narrow, full of debris or drainage grates, in poor condition, or poorly striped.  (The intersection of Petaluma Boulevard and Kastania Road is particularly problematic.)

I think most cyclists and walkers, when they hear the term “path,” think of a separated Class I path, and that is what many thought we were voting for in 2008. This section isn’t a  PATH in the way that most of us would define it…but it does designate a ROUTE. However, most formal bike routes also include some wayfinding – maps, signage, etc. – which are lacking or inadequate in this case. Perhaps, until more of the Class I segments are completed, investing in improved wayfinding would increase the functionality of the route as well as generate good PR by demonstrating that SMART is taking some of our concerns seriously.

Our ride across the county totaled thirty miles, of which only NINE were on Class I separated path. 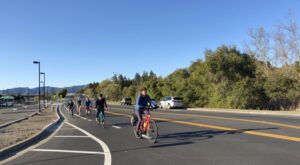 As we approached or departed each of the stations I asked my companions, “Is it obvious where you should go now?” The answer was pretty much always “no.” (The area around the Petaluma station in particular is not only confusing, but terrifying.) After a short break in downtown Petaluma, we zig-zagged onward toward Penngrove.  We stopped to view the two ends of the Payran to Southpoint segment that was completed in 2019, then promptly closed off due to the Highway 101 widening project. Instead we took the Lynch Creek Trail to North McDowell Boulevard, both of which are in poor repair.

Directors Rogers and Bagby left us at this point, as Mr. Rogers had a phone call with the White House. (Although it does seem slightly suspicious that their departure occurred right in front of Lagunitas.) They later caught a Sonoma County Transit bus  – which luckily had room for both of their bikes on the rack – to meet up with us again in Santa Rosa.

From North McDowell, our remaining party proceeded north onto Old Redwood Highway into downtown Penngrove; alas, we did not avail ourselves of any of the tasty treats available there. Continuing north on Petaluma Hill Road, we had two westbound options to get onto the completed Class I segment: Railroad Avenue or Valley House Drive. We took the latter, which passes through Sonoma Mountain Village and onto the Class I path into Cotati and Rohnert Park. Yay! No more traffic!

The Class I path ends at Golf Course Drive in Rohnert Park. We are VERY happy that the gap from here to Bellevue Avenue in Santa Rosa is in process, because it was NOT a very pleasant route! We waited quite a while at traffic lights as we passed all the big box stores; then our very wiggly route mostly had no shoulder, poor pavement, and trucks passing us at fairly high speeds.

After picking up the Class I path at Bellevue, we had to take a big of a jog onto the Joe Rodota Trail and then the Prince Memorial Greenway to Pierce and Sixth Street, after which we got back on again. At the juncture of the three trails, you can SEE the Downtown Santa Rosa station a block away but have no “legal” means to get there besides the route I just described. (Many people just lift their bike over the low wall and trespass on a short stretch of parking lot to Third Street.) As with all the other gaps, there is no wayfinding at any of these points to help you find the next section.

The last bit to the North Santa Rosa station took us past the controversial proposed Jennings Crossing. We then headed back downtown – the Marin contingent to grab a train back home, and the Sonoma locals to lunch.